Here is a sneak peak at a few of the recipes for the upcoming potluck!

2 tbs unsalted butter
1 tsp of olive oil
1 large onion, sliced
1 butternut squash (about 1.5 pounds), cut into 1/8 inch slices
salt and pepper to season
2 tsp fresh sage
1 flaky piecrust (you can make your own, but I get a premade crust from the grocery)
Melt the butter in a large skillet over medium-high heat. Add the olive oil, onion, squash, and salt and pepper to taste, and cook until tender about 10-15 minutes. Transfer the mixture to a medium bowl and stir in the sage; let cool.
Line a baking sheet with parchment. Roll the piecrust on a floured surface into a 12-inch circle; place on the prepared baking sheet. Top the piecrust with the squash and onion mixture, leaving a clear 2-inch border. Fold the edges of the piecrust over and toward the center, overlapping slightly and partially covering the squash. You can chill until the dough is firm (at least 20 minutes and up to 1 hour), but I’ve made it without chilling and it turned out great.

Heat oven to 350° F with a rack set in the lowest position. Brush the piecrust with a bit of olive oil, for a bit of a golden look. Bake until the squash is cooked through and the crust is golden, 45 to 55 minutes. You can also top it with a bit of blue cheese or goat cheese sprinkles right out of the oven.

Clean Green Bean Casserole from Erin Delatte
Modified from http://detoxinista.com
INGREDIENTS
2 yellow onions, sliced thinly
2 tablespoons olive oil
2 cups parsnips, chopped
16 oz. mushrooms, chopped
3 cloves garlic, minced
1/4 cup nutritional yeast
1 1/2 cups water
1 1/2 teaspoons fine sea salt
1 lb. fresh green beans
salt and pepper to taste
INSTRUCTIONS
1. Heat the 1 tablespoon of the olive oil in a large skillet and add the sliced onions, along with salt and pepper to taste. Saute gently over medium-low heat for about 45 minutes, stirring occasionally until caramelized. Use a splash of water, as needed, to prevent sticking.
2. Once the onions are tender and golden in color, remove from heat and set aside in a bowl for later.
3. While the onions are cooking, you’ll have plenty of time to steam the parsnips.
4. Fit a steamer basket into a saucepan, and fill with one inch of water. Add the 2 cups of chopped parsnips, and bring the water to a boil over high heat. Cover and reduce the heat to low, steaming for about 8 minutes, or until the parsnips are easily pierced with a fork.
5. Transfer the steamed parsnips to your blender container, and set it aside.
6. Using the same steamer basket and saucepan, break the pound of fresh green beans into one-inch pieces, and toss them into the steamer basket. Bring to a boil, then cover and steam for 6-8 minutes, until the green beans are bright green with a bit of crunch.
7. Note: At this point, cook the green beans to be as tender as you like– if you prefer them softer, steam them longer. The baking process later will not make them any more tender, so this is your chance to achieve the texture you like.
8. Transfer the cooked green beans to an 8″ x 8″ glass baking dish.
9. Once the onions have finished caramelizing, you can use the same pan to saute the mushrooms and garlic. Heat the second tablespoon of olive oil and and saute the garlic and mushrooms. Cook for about 6 minutes, until liquid is released from the mushrooms.
10. Spread half of the mushroom mixture into the baking dish of green beans, and pour the other half of the mixture, along with any liquid, into the blender container with the steamed parsnips.
11. Into that same blender container, add 1 1/2 cups water, 1 1/2 teaspoons sea salt and 1/4 cup of nutritional yeast to the cooked parsnips and mushrooms. Blend until smooth and creamy. (This mixture may be a bit salty to taste at this point, but keep in mind that it will be diluted when it’s poured over a pound of green beans!)
12. Pour the creamy sauce over the green beans and mushrooms in the glass baking dish, and stir to coat well. (You may end up with more sauce than you need for this recipe– I only used about 1 1/2 cups to coat the vegetables well. Save the rest for a future dish!)
13. Smooth the creamy vegetable mixture with a spatula, and top with the caramelized onions to finish!
14. At this point, you could cover the dish and store it in the fridge until you’re ready to heat and serve.
15. When you’re ready to bake, preheat your oven to 350F and bake uncovered for about 30 minutes, until bubbly. Serve warm and enjoy!
______________________________________________________________

You can add whatever veggies you like to this. Try broccoli, spinach leaves, de-stemmed kale, peppers, mushrooms, and artichokes!

Prepare mise en place. I try to make my own veggie stock from scratch (time permitting). I recommend heating up the stock with a bit of rosemary, a pinch of saffron and a bit of thyme, then strain before you start.  Keep your stock hot but not boiling as you cook.Coat the bottom of your paella pan with olive oil. A cast iron skillet is ideal and works wonderfully. Brown garlic, onion and bell pepper until they’re softened, adding plum tomatoes shortly before the mixture is finished. Mix in some paprika, parsley and thyme. Add rice, mixing together and stirring as the rice browns (1-1 1/2) minutes. As the rice browns mix in the saffron. Make sure to break it between your fingers and stir it in to release the oils. When the rice is slightly translucent add enough stock to cover the whole mixture. If it’s been kept warm, it will begin to boil almost immediately. Lower to a medium heat but keep it at a steady boil. Add the veggies and cover with more stock.  You can stir a few times in the first 5-10 minutes, adding broth as necessary to keep the rice fully covered. After this you must let the paella SIT without disturbing it! Let it cook another 10-20 minutes (I find that this step takes longer on a stovetop), adding broth bit by bit to keep the rice submerged until the rice on the top is al dente. Don’t worry about rice burning to the bottom, the crust is good. When the rice on top is still quite al dente, take paella off of heat and cover. Let it sit for 15-20 minutes. Garnish with lemon wedges and enjoy!

Preheat oven to 200 degrees F. In a large bowl, mix the kale, olive oil, olive oil, nutritional yeast and salt. Spread the kale on large baking sheets and toast in oven 45 to 60 minutes. Stir every 15 minutes or so. If some pierces of kale become crispy, remove from oven. 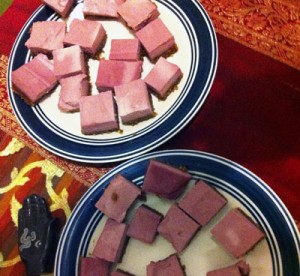 I modified Gena’s genius recipe by using equal portions of walnuts & dates in the crust, using raspberries instead of blackberries and increasing the fruit content!

For cheesecake:
1 cup cashews, soaked for 2-4 hours and drained
1 1/2 cups raspberries (blackberries, blueberries and strawberries work well too – can you see how I love this recipe!!)
1/3 cup coconut oil (melted if not already liquid)
1/3 cup maple syrup
1/4 teaspoon sea salt

Crust:
Lightly oil a Blend the walnuts  and dates in food processor until ingredients are chopped finely and form a stick paste when squeezed between your fingers.  Press into a casserole or baking dish, use a rolling pin or a flat object to press evenly into pan.

The recipe is from Fat Free Vegan – a great source of delicious yet healthy vegan recipes.

What’s In A Name?