Why I Need the 40-Day Reboot: Confessions of a Junk Food Vegan

Tracey surprised me with this brutally honest post. I’m pretty sure her sentiments resonate with many of you. Especially during Mardi Gras. Join her and sign up for the 40-Day Reboot. It’ll actually make getting healthier fun.

Nothing major, just a cold. Here’s the problem: I was also sick the week before last. Just for a few hours with a stomach bug, no big deal. But I also had a cold in October and in August I had strep.

That’s four illnesses in six months. I’m basically averaging one illness every six weeks or so.

So much for being a healthy role model. I seem to be struggling with the healthy part.

So, what’s going on with me? Why am I sick all the time? Do I party? Stay up late? Do a bunch of drugs? Have really bad health karma?

I can’t really answer the karma question, but I can tell you that I go to bed early, sleep seven hours a night, and generally don’t drink and party much. I practice yoga and meditation five to seven days a week. And I’m vegan.

When I tell people I’m vegan, there are a couple of stock responses. Number one is:

“Oh, that’s so hard. I could never give up steak/butter/cheese/whatever.”

This statement is usually delivered with a tinge of defensiveness. Vegans have a bad rap for judging people.
But here’s the thing, y’all, in this day and age, I don’t really have to give up anything to be a vegan. There’s vegan butter (yum!), vegan sausage (yum!), and even vegan cheese (eh). There is a vegan substitute for just about everything you can imagine.

Some vegan substitutes taste really different than their non-vegan counterparts. Some don’t. (Or at least they don’t to someone who has been a vegetarian for the better part of 25 years.)

What almost all of them do have in common is that they are highly processed.  Yep, that’s right, high sodium, high sugar, high mysterious chemicals that I can’t pronounce.

I want to tell you that I never eat this stuff.

I just had toast with vegan butter and two vegan sausage patties. I had vegan pizza for breakfast three days in a row. Last week I ate King Cake for breakfast, lunch, and a snack all on one day.

So, no, I am not going to judge you about your food choices.

And also, being vegan doesn’t make you healthy. I can make bad decisions just like anybody else, and I mostly do most of the time. Why? Habit. Convenience. Laziness. Taste. The same reasons you do.

Why am I telling you all this?

Because most of your immune system is in your stomach. No, not just yours. Mine, too.
Because I am always sick and I always eat crap and are you seeing a pattern here?

So, I am going to do this 40 Day Reboot thing. Because I need someone who is smarter and more disciplined than I am about food to tell me what to do. And I really feel like I have to change my eating habits or else.

(For the record, Jessica did not ask me to write this. She didn’t even know that I was writing it. I am not getting paid for this in any way. I wrote this because I am stuck at home listening to yoga podcasts and feeling really frustrated and bored and ready to change my habits. So there.) 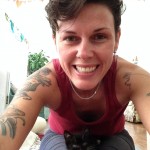 Tracey Duncan is equal parts teacher and student. Tracey believes that each class you attend should teach you something about how to live with more grace. She strives to offer her students classses that balance effort and release, exertion and relief. She has been a massage therapist for almost twenty years and loves bringing her knowledge of anatomy to her students by way of alignment instruction and hands-on adjustment. She believes in interpreting the dharma in a jargon-free way and is always down to talk philosophy. Tracey is also a writer and community builder, and you can learn more about her at www.moreyogalessbullshit. com and www.getbentnola.com.

What’s In A Name?